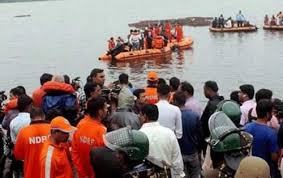 AMRAVATI:Twelve people have died and several are missing after a tourist boat overturned in the Godavari River in the East Godavari district of Andhra Pradesh on Sunday afternoon. There were 63 people on board the boat and 17 have been rescued, authorities said.

The boat, operated by the Andhra Pradesh Tourism Development Corporation, had started off for the picturesque Papikondalu hill range, a prime tourist destination, from Gandi Pochamma Temple near Devipatnam, news agency PTI reported.

The accident took place near Kacchuluru village in Devipatnam Mandal, about 200 km from Amravati.